I’ll finally be firing up the Etsy shop soon as I start cranking out magic wands that aren’t show props! Here’s a look at the first ten! 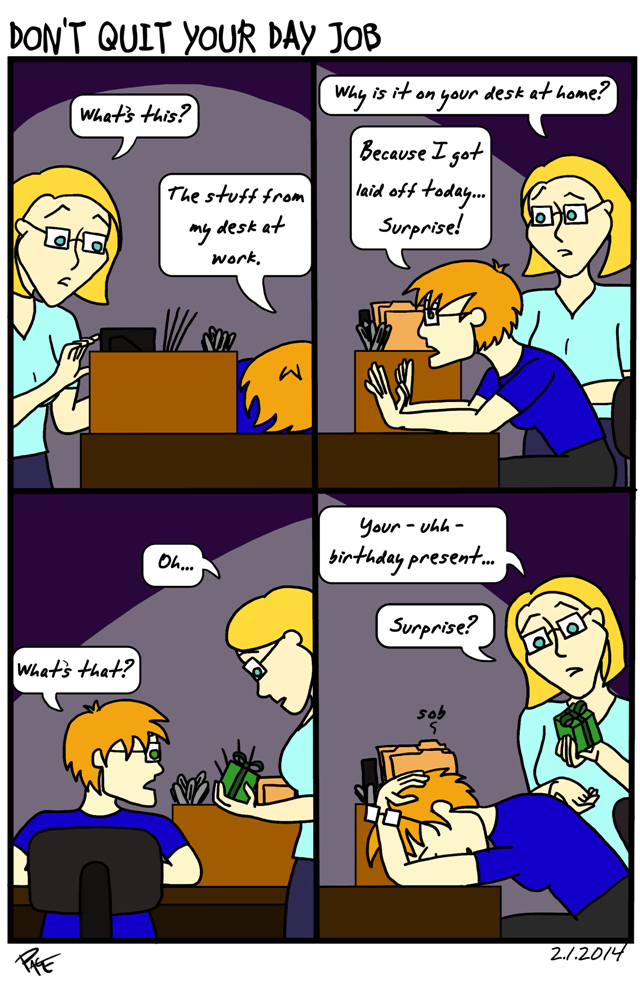 I’ve developed a bit of a preoccupation with watercolors.  I was a prolific painter as a child, then grew out of it as I got into cartooning.  Then I discovered that Randy Milholland of Something Positive also makes these gloriously whimsical watercolors that are a perfect mash-up of both mediums and I just had to try it out.

My first attempts last year were… not the greatest.  I started on the wrong kind of paper, then the colors were dull, and the black permanent ink I was using for the line art didn’t stand up to the watercolors, which would either cover the lines or run right over them.  For someone like Randy, who draws and paints in a much looser style and has better control over his brushes, this isn’t necessarily a problem.  I, on the other hand, am enough of a control freak that I can’t stand coloring outside the lines, but I have very little experience using brushes for fine details, so I did a little experimenting to find more suitable materials.

I started with this cute line drawing of a giraffe with a parasol:

I actually initially created this as digital drawing practice. 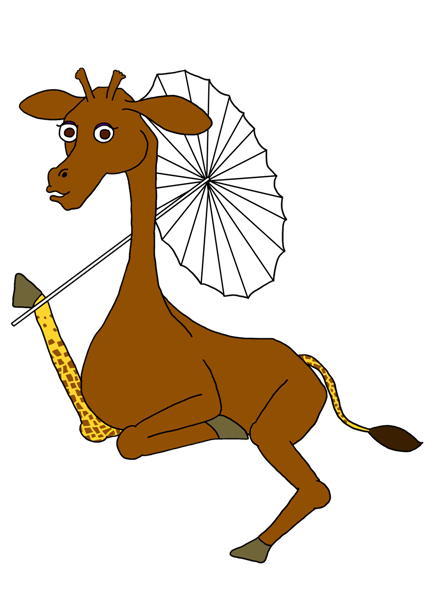 It’s still a work in progress.

In the mean time, I really wanted to pull out the watercolors and play this weekend, so I re-drew the giraffe on watercolor paper, and got out my Speedball pens for a little fancy inking.  Unfortunately, on my first pass at the supply cabinet, I couldn’t find my bottle of India ink, and instead used Black Magic which, it turns out, bleeds a lot before drying on the page.  So I had the lines down, but they were really fuzzy.

I unearthed the India ink, and was very happy to find through some controlled experimentation that it did not bleed, and that after a little practice, I could make pretty nice lines with a size 0 brush that would mostly cover the fuzzy sins of the Black Magic ink.  What followed was a very long evening of painstakingly slow drawing with an overabundance of careful muscle control.

The finished line drawing had only a few hints of the messy first layer. 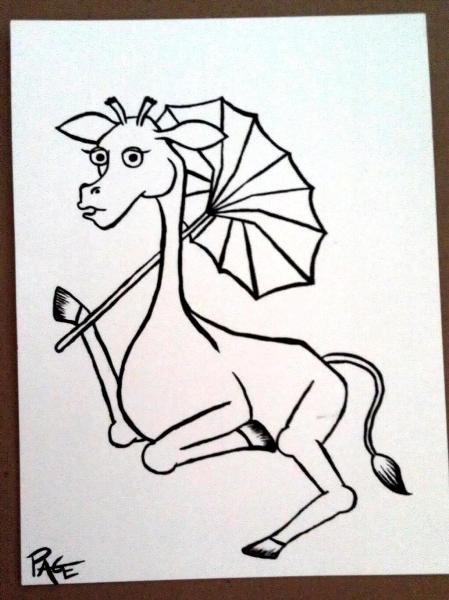 I took even more time coloring.  I started with the easiest bits – first the yellow ochre and burnt umber sand, then the base cobalt blue layer for the water and the lemon yellow of the sunset.  I still have a good bit to learn about color theory, but I was pretty happy with the layering effects of vermilion for the darker red/orange shades, and Prussian blue in the sky and reflected colors in the water.  The main lesson of the background work was to leave more white space.  Watercolor is not a reductive process, and white paint doesn’t very effectively dilute or cover color that’s already down on the page.

The India ink solved several of the problems that had plagued me before.  It did function as an effective barrier for the more watery paint (to a reasonable extent).  It also resisted some of the paint that ended up on top of it.  The dryer mixes were more prone to showing up over the black lines, but even then, the black is bold enough to show through.

I finished the parasol and put down the base yellow on the giraffe then left everything to get really good and dry before I tackled the spots. 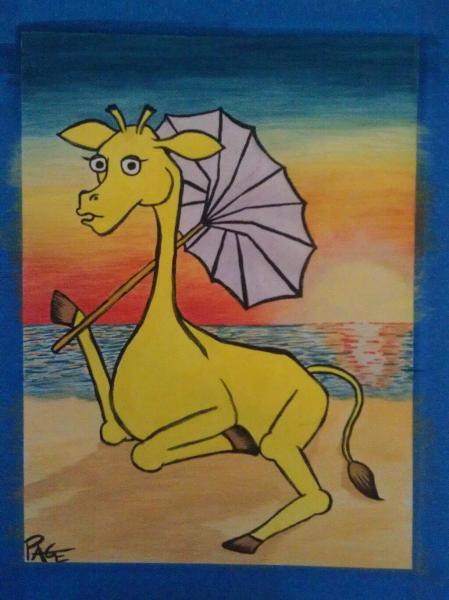 I was actually pretty terrified of the spots.  Giraffe spots are distinctly indistinct – they’re irregularly shaped yet relatively regularly spaced.  I am fairly awful at randomization, but I intentionally didn’t include the spots in the line art because I wanted to challenge myself to be a little messy.  It was a very pleasant change of pace to just let the brush wander where it wanted.  I wound up having a grand old time making all the little mismatched spots, and only lost focus and drifted out of the lines once.

I am really pleased with the final results:

I call her “an American giraffe in Peru” – inspired by a very funny friend who has spent the last few months adventuring in South America and sending back amazing stories and pictures along the way.

My usual method of cartooning is pencil drawing, relatively quick-and-dirty inking with permanent marker in the sketch book, then scanning and inking a second time digitally before coloring.  I waste time with the extra inking step because I generally don’t have the patience or trust in my own fine motor control to get the lines right on the first try, and digital inking allows me to use the “undo” function to maddening excess.

I learned a few things by depriving myself  of that “undo” option:

I will almost certainly be doing more of these.  I feel like I’ve learned a lot in the last week, and now I want to practice.  A lot of what I’m learning on paper will help my digital drawing as well.

All the lentil soup recipes I’ve seen look about the same, and seem simple enough, yet the last time I made it, I somehow managed to get it terribly, terribly wrong.  The only way to salvage it was with copious amounts of Worcestershire sauce, and even then, it was a mushy, salty mess.  So tonight I focused on the savory.  (And following the cooking directions, which, shockingly, also helped a good bit.)

I think it goes without saying that this will not be a vegetarian recipe.  It is, however, gluten free!

The standard recipe calls for a pretty tame list of ingredients:

Seasonings vary, but I most commonly saw 1 tsp Italian herbs, black pepper and salt to taste.  As this clearly didn’t do the trick for me last time, I added some more interesting flavors.

One of the things I love most about the Austin improv community is the bustling network of people who do all the support work for improv shows – theater owners, house managers, interns, my fellow tech monkeys, and the photographers.  We have a small but mighty band of photographers ranging from enthusiastic amateurs to freelance professionals who photograph a large portion of the improv shows that happen in this town.  They are extraordinarily generous with their time, and provide an invaluable service, capturing permanent memories of a performance art that is, by definition, fleeting.

One of the mainstays of the Austin improv scene is Roy Moore of Control Images.  He is the man behind the promotional pictures for many of the Gnap! and Institution Theater productions, as well as the official on-site photographer for Blue Goggles Films.  He is an adventurous artist with a keen eye for composition and lighting, and a knack for pulling personality and attitude out of two-dimensional still images.

This weekend marks the opening of Roy’s first solo gallery show, DISTILLATION, at the Salvage Vanguard Theater.  The collection ranges from stunning portraits – many from those promotional photo shoots – to stolen glances at forgotten, dilapidated, whimsically graffiti’d corners of the city, to colorful abstracts.  They have a synesthetic quality, conjuring not just images but a sense of movement, a faint sound.  Maybe I’ve just been too immersed in music lately, but looking at some of the abstracts, I could swear I heard a distinct melody that went with each one.  The alternate takes of photos I’ve seen a hundred times on show posters and Facebook albums revealed extra dimensions of familiar faces, and made me want to see those shows all over again.

It’s stunning work by an artist who takes real joy from his craft.  If you happen to be in Austin, swing by and check it out sometime this month. So it’s been a busy year (and …uh… change) since Don’t Quit Your Day Job went on hiatus.  I’ve been distracted by improv and a new-found fiber arts gang and all manner of other mischief, but the biggest, most all-consuming distraction of the last year has been the addition of a truly precious little girl to the family, and my big sister’s long-overdue promotion to “Mom”.  So she and her cousin are the stars of the comic marking their aunt’s triumphant return to late nights cursing at my computer and unsteady drawing hand.  You all remember Missy.  Now meet JoJo.

I have a whole pile of new things in store, so stick around friends.

unbound page
Create a free website or blog at WordPress.com.