Tonight, I give you repair No. 2. My sister-in-law commissioned a repair many moons ago, which unfortunately sat untouched for too long while the chaos in the craft room stubbornly refused to be tamed.  When I finally dug out the supplies for Dear Roommie’s Dear Mother’s necklace, I warmed up with this repair. It seems sister-in-law’s sister had a necklace made with these large, heavy turquoise beads that were so large and tightly strung that they stubbornly refused to lay flat.  Then the nylon string on which they were strung finally gave up altogether, and the necklace broke.

The request was very simple: Can you fix the necklace, and maybe add some beads in between so the thing will lay flat and not break? Having played with some turquoise for a previous project, I knew exactly what the necklace needed.

I have poppy jasper chip beads in my collection, and they are some of my very favorites because of their rich color and the variety of shades of red and brown.  The giant turquoise beads also happened to have similar shades of brown in them, so it seemed a natural fit to pair my tiny poppy jasper chips with the turquoise monsters.

The color match is bold, but works because the red is so small.  I briefly considered silver spacers as well, but that just seemed unnecessary.

The final product was yet another success.  Not only did I score another victory in my new adventures in color coordination, but I also secured the mechanical fix needed to prevent the necklace from self-destructing.  The beads are strung on not one but two strands of nylon-coated wire.  In addition to the spacer beads, I left a little slack on the string so the beads will freely move when the necklace is pulled into a ring.  Most of the hardware was still functional, so I just reused it, but I used fresh bead tips.

Once again, the necklace was delivered to a very satisfied customer.  Sister-in-law’s sister immediately put it on and wore it all night when I saw her on December 23.  It even survived a little tugging by our darling niece.

Now we venture into the repairs portion of my holiday crafting.

My aunt and cousin arrived at our little mountain paradise earlier this week.  Yesterday, my aunt very sweetly asked for my assistance with a small problem.  You see, she had purchased as a Christmas present for my cousin, a really awesome kitty hat – a Cat Hat, if you will. 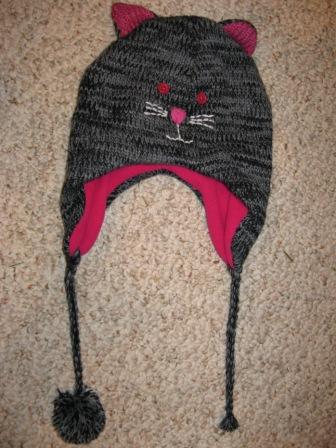 However, Cat Hat was missing a pom pom.  It may have been missing already by the time of purchase, but my Aunt was just so thrilled to find something her daughter would so dearly love that she just didn’t even notice the status of the pom pom until after the giving of the gift.

Her request to me:
“Can you think of some way to replace this pom pom?”

In the course of investigating the construction of the remaining pom, I realized that it was far too dense to properly analyze.  Shortly thereafter, I came to the conclusion that the thing could probably be cut off and split into two poms, which would likely still be very full and fluffy.

Tonight I did just that.  I was able to find the knots holding the pom on and together, and as I cautiously pulled out chunks of string, my aunt diligently straightened and grouped the strings so that they could then be retied and reattached.

The finished product, I am pleased to report, looked perfect.