Hi!  I’ve been a miserable failure at launching my etsy store this year, but guess who hasn’t!

Yes, Dear Roommie has successfully made things and put them in her etsy shop!  They are shiny!  Go and buy them!

Tonight, I give you repair No. 2. My sister-in-law commissioned a repair many moons ago, which unfortunately sat untouched for too long while the chaos in the craft room stubbornly refused to be tamed.  When I finally dug out the supplies for Dear Roommie’s Dear Mother’s necklace, I warmed up with this repair. It seems sister-in-law’s sister had a necklace made with these large, heavy turquoise beads that were so large and tightly strung that they stubbornly refused to lay flat.  Then the nylon string on which they were strung finally gave up altogether, and the necklace broke. 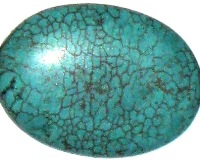 The request was very simple: Can you fix the necklace, and maybe add some beads in between so the thing will lay flat and not break? Having played with some turquoise for a previous project, I knew exactly what the necklace needed.

I have poppy jasper chip beads in my collection, and they are some of my very favorites because of their rich color and the variety of shades of red and brown.  The giant turquoise beads also happened to have similar shades of brown in them, so it seemed a natural fit to pair my tiny poppy jasper chips with the turquoise monsters.

The color match is bold, but works because the red is so small.  I briefly considered silver spacers as well, but that just seemed unnecessary.

The final product was yet another success.  Not only did I score another victory in my new adventures in color coordination, but I also secured the mechanical fix needed to prevent the necklace from self-destructing.  The beads are strung on not one but two strands of nylon-coated wire.  In addition to the spacer beads, I left a little slack on the string so the beads will freely move when the necklace is pulled into a ring.  Most of the hardware was still functional, so I just reused it, but I used fresh bead tips.

Once again, the necklace was delivered to a very satisfied customer.  Sister-in-law’s sister immediately put it on and wore it all night when I saw her on December 23.  It even survived a little tugging by our darling niece.

We now move into the first of the August craft fair gifts.  Specifically, this is the only one that required any further crafting.  I purchased a very lovely glass pendant for Dear Roommie’s Dear Mother, with plans of turning it into a necklace.

Needless to say, I didn’t get it done before I drove Dear Roommie and Dear Mother to the airport two days before Christmas.  Instead, I dug out a corner of the craft room and put together the necklace in the few hours between the airport drop-off and my own long drive to Houston.

I am especially fond of creating multi-strand and mixed-media jewelry.  In this case, the ribbon back half also served to save my sanity after stringing half of four strands of seed beads while under a time limit.

The finished product turned out a good bit longer than I intended, so I’ll probably have to take apart the ribbon portion and try again, but I was really pleased with the final design.

Roommie’s birthday was in March, so obviously, I had to make her jewelry!

The necklace is a variation on a super-simple design I dreamed up at some point last year. 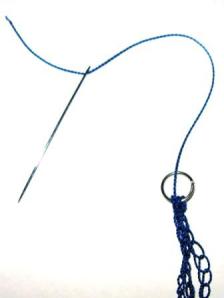 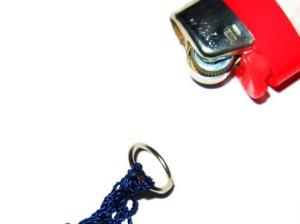