A few weeks ago I received the following urgent request from my sister:

Hey Sis –
Someone seems to have misplaced his ultra-warm, fur-lined, ear-flap, “Nanook of the North” hat.  Do you think you might be able to help  😉 ?   I figured even asking you might be sufficient to make the hat reappear but thought you might have fun with it regardless.
As it just so happened, I had recently been pondering just such a hat, and quickly set to work on the kind of silly monstrosity I knew I could never make use of in Texas, but which would find a happy home in Ohio.
The plan was simple:
1) Make an inner layer of something very soft and fluffy, knitting in the round with large-ish needles.  Add on a wide front flap and two smaller side flaps to cover the ears.
2) Make an outer layer of something tamer and smaller, knitting two strands at a time with smaller needles, to make a nice tight gauge that will adequately hold in heat.
3) Stitch the two together, crochet a long chain (double-strand again, of course) tassel on each ear flap, and call it a hat!
A quick trip to Hobby Lobby yielded two skeins of Caron Simply Soft in Dk Country Blue and two skeins of Yarn Bee Soft Illusion Super Bulky sapphire.  I cast on 120 stitches on size 7 round needles with the dark blue Simply Soft for the outer layer.  The inner layer I started on size 10 round needles with 60 stitches.  The 2:1 ratio made it easier to stitch together the two parts at the end, since I could stitch two outer stitches to each inner and get a nice clean seam.
I found the two separate pieces to be particularly convenient because I get very tired of doing smaller gauge knitting for any significant period of time, so I could switch to the big fluffy stuff when I was getting bored.  I underestimated the height of the outer layer a couple of times and had to perform the unfortunate task of pulling out a dozen or so rows of decrease before I finally managed to get a finished product that was deep enough to stay on a normally proportioned head.  The final product, however, was well worth the effort.  It was warm and fluffy and utterly adorable: 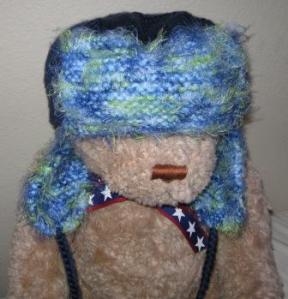 I would like to take this opportunity to brag on the U.S. Postal Service.  The hat went into the mail on Saturday afternoon, and on Monday I received a rather enthusiastic picture text from my sister, who informed me that I did good, and that Someone loved the hat. 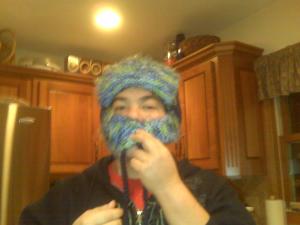